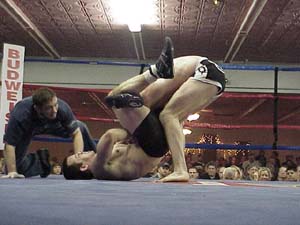 LaSalle, IL. Just when you think that a show can't get much bigger something happens that it does. This is what has happened at the Silverback's Classic in LaSalle, IL. Each time it is held, the Illinois Valley Banquet Center is forced to open up another section of the building to accommodate the crowd. A standing room only crowd was on hand to witness another of Phil John's successful shows.

The first fight of the night pitted Jimmy "The Wild Cat" Bruketta, Canton, IL, against, Wisconsin fighter, Ryan Ackerman. From start to finish both fighters were constantly moving with submission attempts and strikes. The fighters were closely matched with the edge going to Ackerman. Ackerman controlled most of the action and was more on the offense throughout the fight. That didn't detract from Bruketta's attempts at submission.

In the second round, Ackerman had to escape from three good submission attempts by Bruketta. Ackerman's striking kept him in the dominate position for most of the round.

The third round was more of the same. Ackerman took the fight to the ground. Bruketta missed an armbar attempt. Ackerman gained side control and then half mount, striking the whole time. Never giving up, Bruketta forced the fight to go to decision. Ryan Ackerman was declared the winner by unanimous decision.

Robert Wynne and Eric Gwaltney clashed in a fast paced fight. After feeling each other out, Gwaltney went in for the take down and got side control. Wynne tapped when Gwaltney started landing knees to the body.

The fight between Pat Ballard and Jason Stransky was a slug fest from start to finish. It only took 1:29 for Stransky to score a TKO from strikes.

The final fight of the evening put Joe Pearson and Rick Olson together for a war of championship determination. Both fighters were quite capable on their feet as well as on the ground. Olson's submission attempts were thwarted by Pearson's superior strength. It was only Olson's technical ability that kept Pearson from submitting him.

In the end, even the judges could not decide which fighter was better. After three grueling rounds, the fight was declared a draw.

The results for all the fights are listed on our results page.

The production was what we have come to expect out of Phil Johns. Well organized with all personnel knowing what their jobs entailed. Phil tries to get his shows started as close to on time as possible and he has succeeded. The show ran smoothly with planned breaks for the crowd. The audience was enthusiastic and knowledgeable, They appreciated the performance by all the fighters and let them know it.

If you have the chance to witness one of Phil's shows, spend the money, you won't be disappointed.