Tyson Fury pulls out of fight with Alexander Ustinov 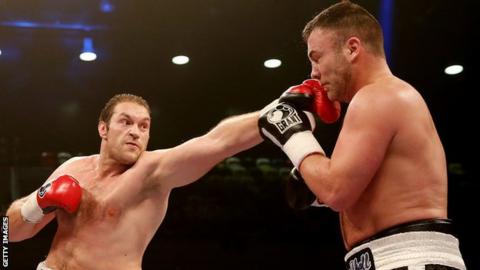 The 25-year-old pulled out of the bout after his uncle and first trainer Hughie fell seriously ill and was taken to hospital.

Warren added that Fury would now fight Chisora at a later date.

The event in Manchester will go ahead with Hatfield's Billy Joe Saunders' clash with Italian Emanuele Blandamura for the vacant European Middleweight title now the main fight.

Fury had vowed never to fight Chisora after he pulled out with a fractured hand. But promoters told BBC Sport he was contractually obligated to do so and Warren added: "We will be announcing the rescheduled date for Chisora v Fury next week."

Hughie Fury was taken ill after the weigh in on Friday. Warren said: "After Dereck Chisora pulled out because of his hand injury, we worked very hard to secure a world ranked opponent in Ustinov.

"It's sad that Tyson's uncle Hughie is in a serious condition and our thoughts are with him. The show will still go ahead and as before it's a great card."

Ustinov was perceived to be a very different proposition from Chisora. He has lost just one of 29 fights and is seven inches taller and four stones heavier than Londoner Chisora.